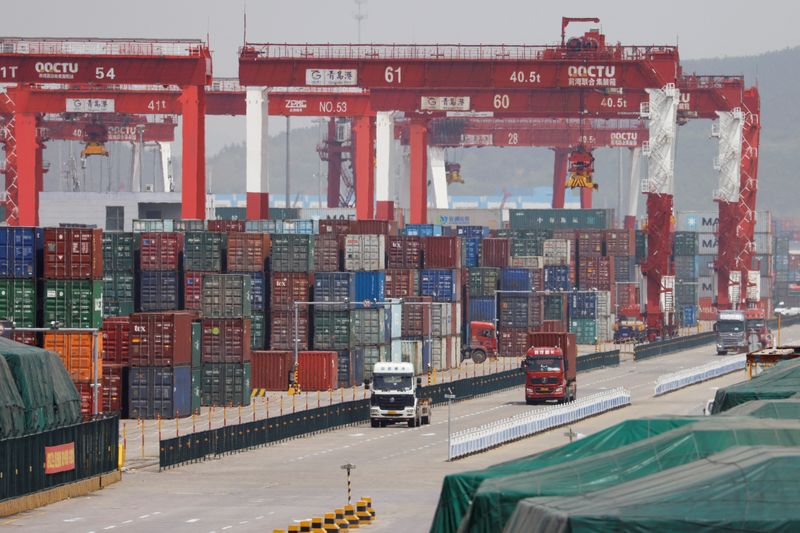 FILE PHOTO: Trucks are seen at a container terminal of Qingdao port in Shandong province, China, following an oil spill in the Yellow Sea caused by a collision between tanker A Symphony and bulk vessel Sea Justice off the port, April 28, 2021. REUTERS/Car

BEIJING (Reuters) — China’s export growth is expected to have slowed further in September as overseas demand weakens, adding to strains on the shaky economy amid COVID curbs and a property crisis, a Reuters poll showed on Thursday.

Outbound shipments likely rose 4.1% from a year earlier after growing 7.1% in August, according to the median forecast of 30 economists in the poll.

Surging inflation, higher interest rates and the months-long Ukraine war are increasingly weighing on the global economy, with China’s protracted slowdown adding to the pressure.

Both the official and private-sector China factory activity surveys showed new export sub-indexes extended contractions last month. Exports had been one of the few bright spots for the economy this year.

«The PMIs add to growing evidence of a turning point in foreign demand,» said Julian Evans-Pritchard, economist at Capital Economics, adding this could be the start of a double-digit contraction in Chinese exports.

Meanwhile, imports are expected to remain weak in September, likely rising 1%, compared with only 0.3% in August.

South Korea’s export growth, a leading indicator for China’s imports, hit the slowest pace in nearly two years in September. Shipments from the trade-dependent country to China were down 6.5%.

With the weakening yuan, China’s trade surplus is likely to have widened to $81.0 billion from $79.39 billion in August, the poll showed.

Trade data, which will be released on Friday, is one of the last official economic indicators to be announced before China’s ruling Communist Party Congress starting on Oct. 16.[L4N3090YT]

As the world’s second-biggest economy contends with continued COVID-19 curbs and a weakening property sector, the International Monetary Fund on Tuesday downgraded its 2022 growth forecast for China to 3.2% from 3.3%.