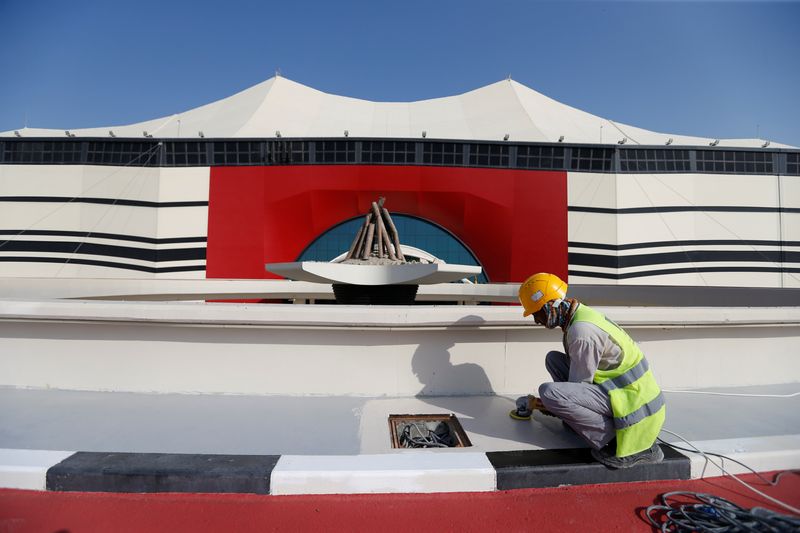 FILE PHOTO: A worker puts final touches at Al Bayt Stadium, one of the venues of the Qatar World Cup 2022, in Al Khor, Qatar, November 17, 2021. REUTERS/Hamad I Mohammed/File Photo

By Rachel More and Emma Farge

GENEVA (Reuters) -The number of people forced into modern forms of slavery has risen by a fifth in recent years to around 50 million on any given day amid a surge in poverty and other crises, the U.N. International Labour Organization (ILO) said on Monday.

More than a half of those had been forced to work against their will and others forced into marriage, the ILO said.

Both came under its definition of modern slavery as they involved people who «cannot refuse or cannot leave because of threats, violence, deception, abuse of power or other forms of coercion,» it added.

The situation had been exacerbated by crises such as COVID-19, armed conflicts and climate change which had left more people in extreme poverty and more forced to migrate, the agency said.

«I think, by and large, that we simply relaxed our efforts. We’ve taken our eye off the ball when it comes to forced labour,» ILO Director-General Guy Ryder told Reuters, calling for improvements in recruitment practices and labour inspections.

He said trade measures, such as a ban on products and imports made with forced labour currently under review by the European Union, could also help.

Compared with the last count for the year 2016, the number of people in modern slavery has risen by around 9.3 million, the report said.

The ILO, which based its estimates partly on household surveys, found that more than half of all forced labour occurred in upper-middle income or high-income countries, with migrant workers more than three times as likely as locals to be affected.

In a separate part of the report, the ILO said that Qatar — which has faced allegations of labour rights violations relating to migrants working in the run up to the soccer World Cup in November — had made «significant progress» since the opening of an ILO office there in April 2018.

Qatar 2022 Chief Executive Nasser Al Khater Qatar said on Thursday the country had faced a lot of unfair criticism over its hosting of the World Cup that was not based on facts.

The ILO report also pointed to concern about accusations of forced labour in parts of China.

It referred to a report released by the U.N.’s rights office on Aug. 31 that said «serious human rights violations» had been committed in China and that the detention of Uyghurs and other Muslims in Xinjiang may constitute crimes against humanity. [L8N30G21T]

Protests erupt in Xinjiang and Beijing after deadly fire

‘The ICU is full’: medical staff on frontline of China’s COVID fight say hospitals are ‘overwhelmed’

Holiday trips within China surge after lifting of COVID curbs