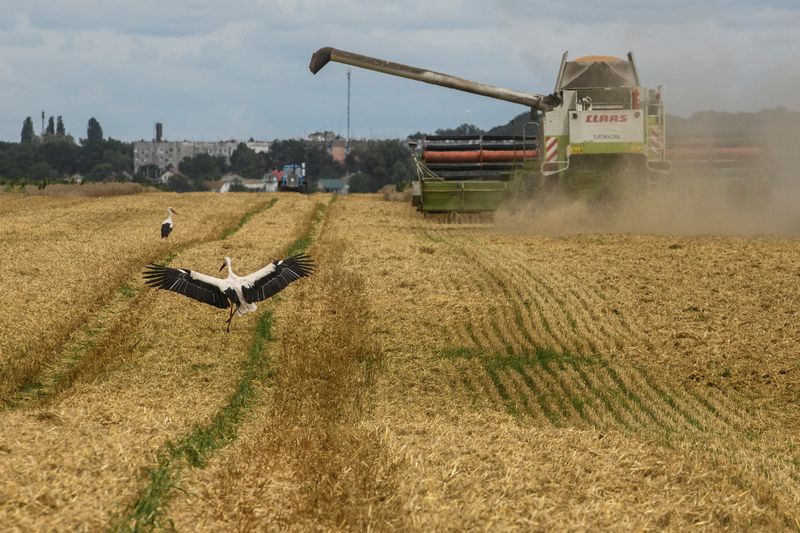 FILE PHOTO: Storks walk next to a combine harvesting wheat in a field near the village of Zghurivka, amid Russia’s attack on Ukraine, in Kyiv region, Ukraine August 9, 2022. REUTERS/Viacheslav Musiienko

ISTANBUL (Reuters) -A U.N spokesperson said on Monday that «urgent» steps are needed to relieve a backlog of more than 150 ships involved in a deal which allows Ukraine to export grain from ports in the Black Sea.

The comments come as Kyiv accused Russia of blocking full implementation of the agreement, which was brokered by the United Nations and Turkey in July to ease a global food crisis and which comes up for renewal next month. Russia has threatened to pull out over its own complaints.

Vessels carrying grains and other foodstuffs to and from Ukrainian ports must be inspected by teams organised by the four-party Joint Coordination Centre (JCC) at anchorages in Turkey.

«There are currently over 150 vessels waiting around Istanbul to move and these delays have the potential to cause disruptions to the supply chain and port operations,» said Ismini Palla, U.N. spokesperson for the Black Sea Grain Initiative.

She said the four-party JCC recently increased to five the number of inspection teams.

Reuters reported the backlog jumped last month, leaving anchored ships in the Marmara Sea stretching out beyond the horizon off Istanbul.

The four parties to the deal — Russia, Ukraine and brokers Turkey and the U.N. — are currently negotiating a possible extension and expansion beyond its Nov. 19 deadline.

«The U.N. convenes the parties daily and has urged full and good faith participation in the (deal) and the need for additional urgent measures to be taken so the supply chain does not get disrupted and the Initiative continues to deliver more and much needed food to the world,» Palla added.

The grains-export deal paved the way for Ukraine to resume grain exports from three ports that had been shut since the Russian invasion. Moscow also won guarantees for its own grain and fertiliser exports.

Ukraine has so far exported 8.5 million metric tonnes of grain and other foodstuffs aboard 379 outbound voyages under the deal, the JCC said.

Amir Abdulla, U.N. Coordinator for the Black Sea Grain Initiative, told Reuters this month he had asked Russia and other parties to end «full-blown» inspections of outgoing vessels to ease the backlog.