Economic activity for the US for the third quarter is on track to recover in this week’s initial estimate from the government, based on the median for a set of estimates compiled by CapitalSpectator.com. The rebound is set to fade in Q4, however, according to early projections and so any celebrations over this week’s results may be short-lived.

The Bureau of Economic Analysis is expected to report on Thursday, Oct. 27, that output increased 2.1% for the July-through-September quarter (seasonally adjusted annual rate). If correct, the advance will mark the first quarterly GDP increase in 2022. The current median Q3 estimate is slightly above the previous estimate, published on Oct. 12. 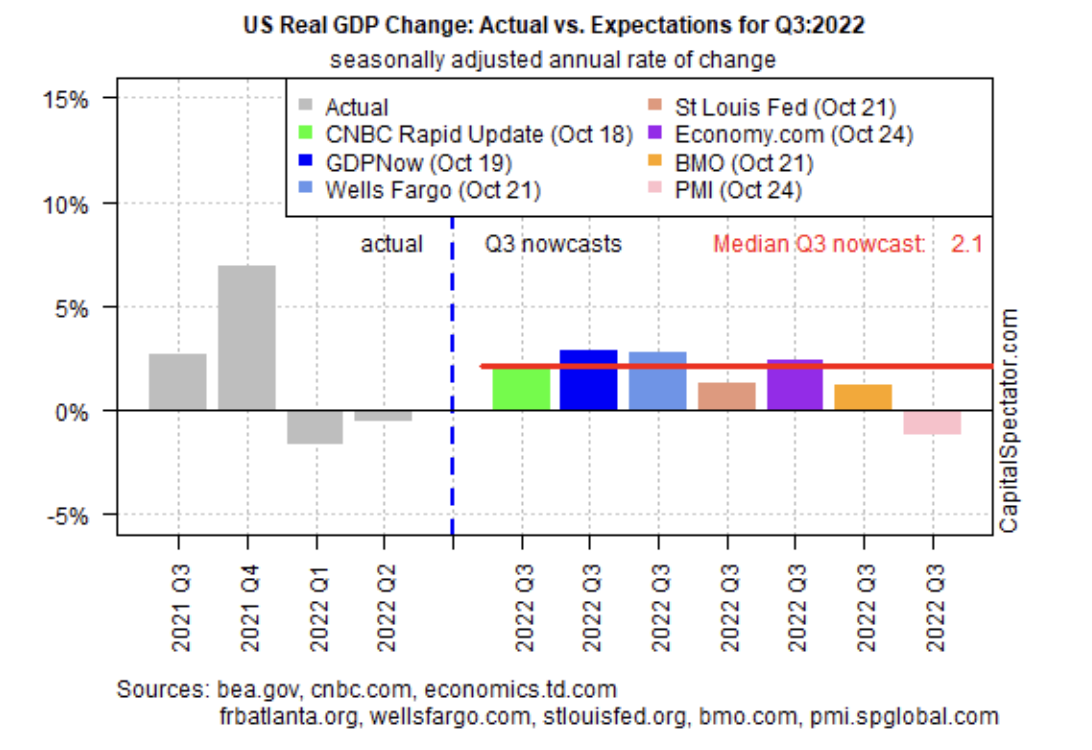 The numbers are encouraging, but don’t pop the champagne just yet .The expected return of growth looks set to fade in Q4. The October PMI survey results, for example, advise that the slowdown in US economic activity that’s been unfolding all year has deteriorated further this month. The S&P US PMI Composite Output Index, a proxy for GDP, fell to 47.3 in October, well below the neutral 50 mark that separates growth from contraction. 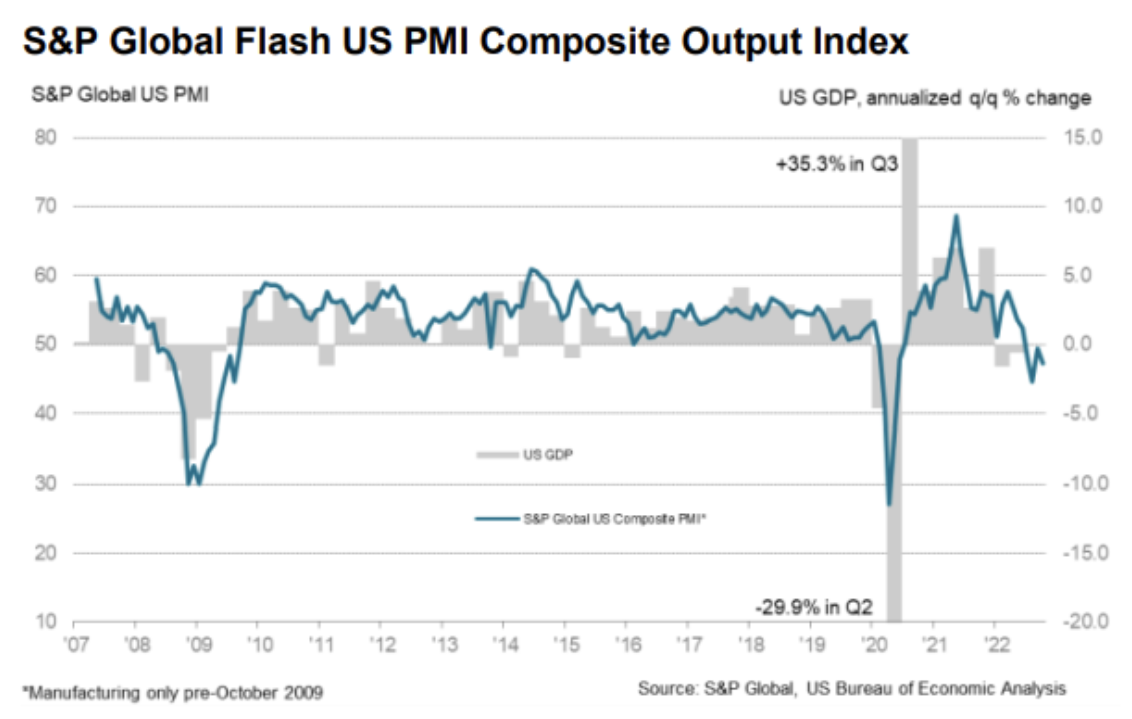 “The US economic downturn gathered significant momentum in October, while confidence in the outlook also deteriorated sharply. The decline was led by a downward lurch in services activity, fueled by the rising cost of living and tightening financial conditions. While output in manufacturing remains more resilient for now, October saw a steep drop in demand for goods, meaning current output is only being maintained by firms eating into backlogs of previously placed orders.”

Proprietary business-cycle analytics published in the weekly updates of The US Business Cycle Risk Report have been estimating for several weeks that the economy will start contracting slightly in November. The Economic Trend Index (ETI) and Economic Momentum Index (EMI) have been sliding all year, highlighting a persistent slowdown in economic activity. A similar story has been unfolding in the New York Fed’s Weekly Economic Index, which slipped to its lowest reading in over a year as of mid-October. 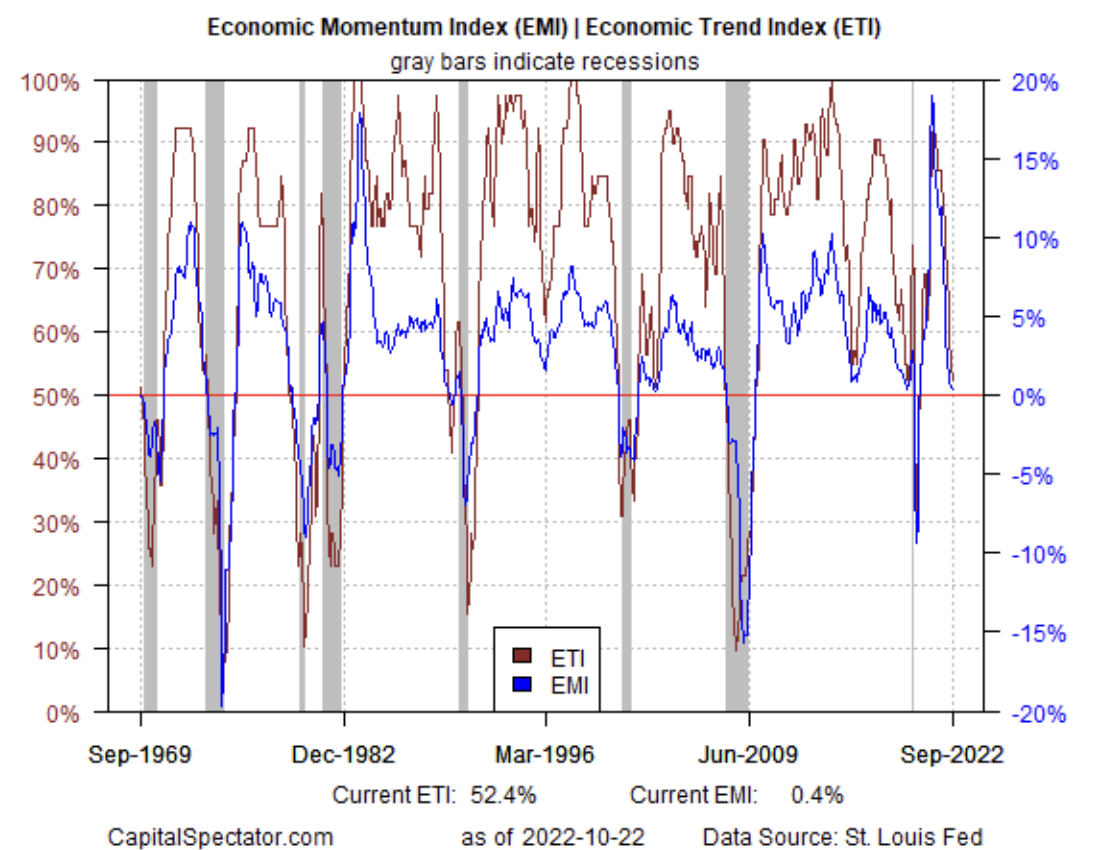 Using an econometric technique to project each of the underlying 14 indicators that comprise ETI and EMI point to November as the start of readings below the respective tipping points for these business-cycle benchmarks. 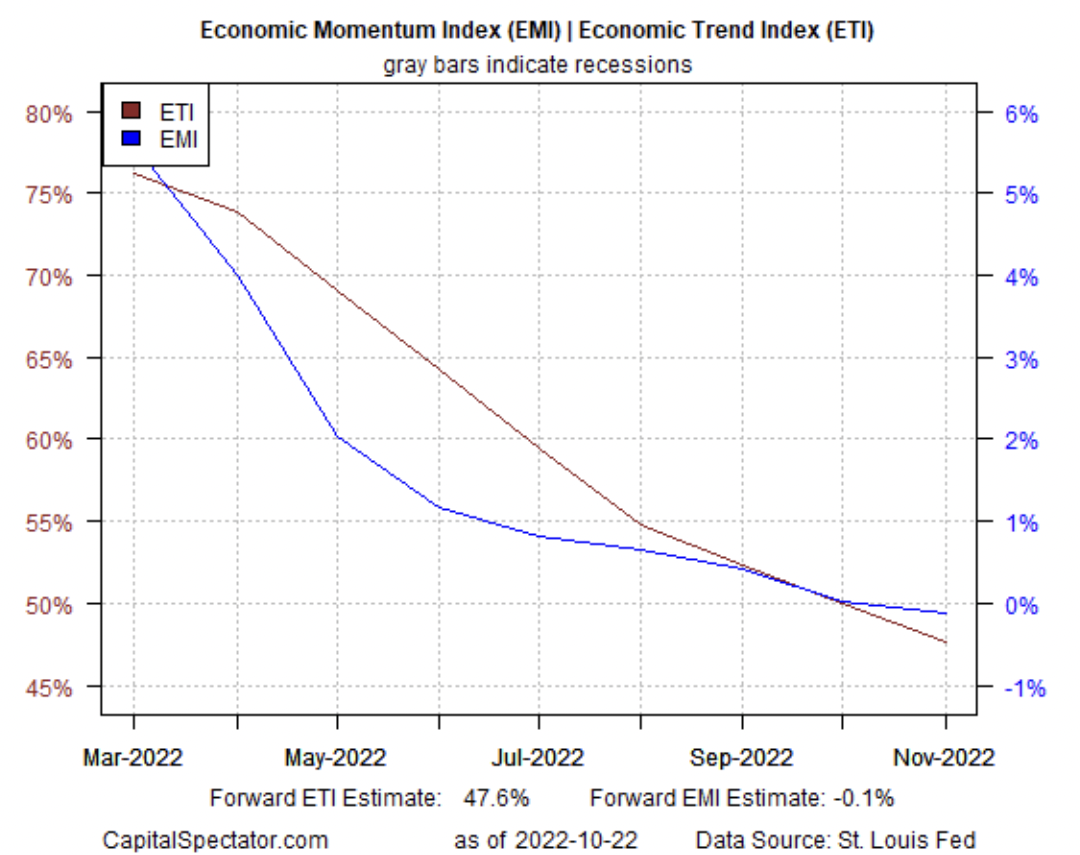 The good news is that downturn will be mild to the point of virtually indistinguishable from zero or slow growth, at least initially. That raises the possibility that incoming data could change the outlook and push the start date for an NBER-defined recession into December or early 2023. Or perhaps the economy just slows to a crawl for a period of time.

Nonetheless, the evidence is building that the bounce in Q3 economic activity will be temporary. Although the economy doesn’t appear vulnerable to a steep contraction at this point, that could change in the months ahead. For now, this much is clear: the odds are fading that Q3’s solid economic activity will spill over into Q4 and beyond.

Here’s Why You Shouldn’t Fight the Fed

4 Stocks Which May Benefit from Recent Political Turmoil in Brazil 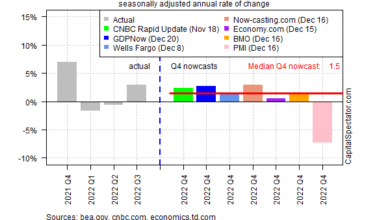