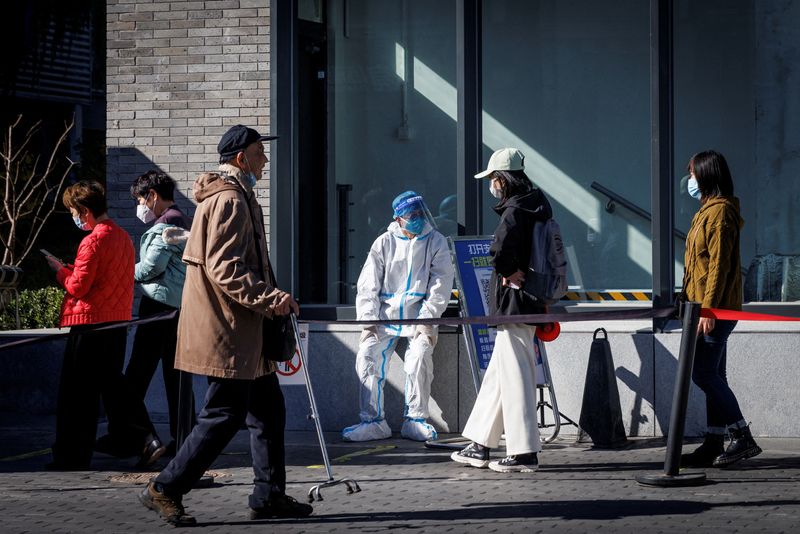 BEIJING (Reuters) — China’s economic growth is hitting an early speed bump in the fourth quarter as COVID-19 curbs and anxieties further tapped the brakes on travel and shipping, constraining consumption and commerce in the world’s second-largest economy.

China reported on Monday a faster-than-expected 3.9% expansion in its economy in the third quarter, but data for September showed weak imports of goods and retail sales, reflecting its still subdued domestic demand.

Even in its feeble state, household consumption of goods and services accounted for more than half of gross domestic product growth in the third quarter, underlining its outsized weighting in the economy.

Mike, an international school teacher in Xian, said he had decided to stay put in the city.

«It is simply not worth the financial risk as well the mental strain of having to deal with getting locked down in another city, endless cancellations of flights, etc.,» he told Reuters, requesting he be identified by his first name only.

A gauge of how mobile people are in China slumped 29.5% on Oct. 23 from a year earlier, versus a decline of 27.5% a week earlier, Nomura wrote in a research note, citing GPS data tracked by Chinese search engine giant Baidu (NASDAQ:BIDU).

The ratio of cancelled flights to scheduled flights remained elevated, rising to 68.33% over the week of Oct. 18-24 from 67.14% the week before, according to Reuters calculations based on data from air traffic consultancy Variflight.

Container throughput at eight major ports fell 7.3% during Oct. 1-10 from a year earlier, compared with a 4.4% increase in the last 10 days of September, partly due to worsening domestic trade, data from China Ports and Harbours Association showed.

An index measuring road freight transport turnover tumbled 26.2% on Oct. 21 from a year prior versus a 23.7% drop a week earlier, according to Nomura.

As China wages war on Omicron this year, authorities have stepped up PCR tests on local populations and ramped up requirements on visitors, dampening the desire to travel. Inspections of goods from overseas and other provinces have also delayed deliveries for days and even weeks.

China has repeatedly underlined its zero-COVID-19 policies even as cases ebb. New local infections fell 24% to 6,096 during Oct. 18-24 from a week earlier.

Despite the drop, the cities of Guangzhou, Zhengzhou and Xian have reported a resurgence, risking the implementation of more curbs on their combined population of more than 44 million.

The cities — major domestic logistics hubs and producers of everything from autos and auto parts to machinery and electronics — reported a total of 804 new local cases for Oct. 18-24, up from 431 in the previous seven-day period.

In Zhengzhou, residents of some districts have been told to «stay at home», while dine-in is prohibited at restaurants. Schools, childcare institutions and off-campus training institutions function online only.

Zhengzhou’s metro traffic slumped 79% from Oct. 11 to Oct. 15, according to the latest available data.

In Guangzhou, colleges have been closed since Monday in one district, while primary and secondary schools and kindergartens have gone online and restaurants have been shuttered since last week. In another district, cinemas, theatres, bars, gyms and internet cafes were closed until Wednesday.

Metro traffic in Guangzhou dropped 8.8% during Oct. 18-24 from the previous week, Reuters calculations based on data released by local metro operators showed.

«With the ‘dynamic clearing’ COVID strategy likely to stay in place for the foreseeable future, consumption is unlikely to rebound,» said Chinese research group Gavekal Dragonomics.