“International investors will not want to chase GBP/USD above the 1.15 level,” ING said in a note, as the challenge facing Sunak and his new time “will be harder than the one that existed earlier this summer.”

Sunak is expected to be appointed as U.K. Prime Minister by King Charles on Tuesday after winning the race to become the leader of the governing Conservative Party.

He replaced Liz Truss, whose so-called “Trussonomics” policies — included a plan to drastically cut taxes to encourage economic growth, but was sorely lacking in detail on how the plan would be funded — spooked markets.

The plan was punished by markets as U.K. borrowing costs soared to a 20-year high, forcing the Bank of England to intervene by resuming quantitative easing, or bond buying on a temporary basis.

Some fiscal credibility, however, was restored after Truss appointed a new chancellor and reversed the policies that pushed the British pound to an all-time low in September.

These measures would bring further stability to U.K, markets, which when combined with the recent strength in sterling “will allow the BoE to tighten monetary policy more gradually than would otherwise be the case,” Daiwa Capital Markets said in a note.

“[W]e now think a hike of 75bps (rather than 100bps) might be more likely in November and maintain our view that the terminal rate will be no higher than 4.75%,» it added.

BoE members have been sounding out the prospect of less hawkish action in recent weeks. BoE monetary policy committee member Catherine Mann on Sunday said that “the curve was perhaps too aggressively priced.” 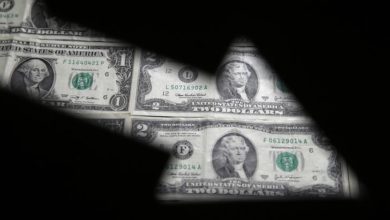 Asia FX slips while dollar steadies ahead of CPI readings